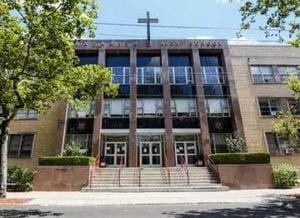 The first semester of the initial year of Nazareth High School was spent at the newly completed Bishop Kearney High School since Nazareth’s building was yet unfinished. In the spring of 1963, Bishop Brian McEntegart dedicated the new building, and the first class of freshmen joined the small Nazareth faculty in moving into their own school. The Catholic people of Brooklyn had generously given millions of dollars to ensure the continuance of Catholic secondary education in the Diocese of Brooklyn. Brother John Olsen, C.F.X., served as the first Principal from that year until 1966. He, and the other Xaverian Brothers and Catholic laymen who administered and staffed the new school, chose to center the goals of Nazareth around the theme “wisdom, age, and favor with God” because these were the qualities of Jesus as described in Scripture as he grew up in the town of Nazareth.

The first class of Nazareth Kingsmen graduated in June of 1966. Nazareth prospered in those years using new educational methods that characterized the school as a forward-looking, progressive institution.

In 1974, the Principal, Brother Mathew Burke, with the encouragement of Bishop Francis Mugavero, formed a new Catholic school governed by a Board of Trustees because the Diocese could no longer continue to subsidize the school. The new school was called Nazareth Regional High School and was staffed mostly by Catholic laymen along with some religious men and women. In 1976, the school admitted women for the first time, and in June 1980 the first female valedictorian was selected.

In February of 2012, the Board of Trustees of Nazareth Regional High School, citing financial concerns and low enrollment, announced that Nazareth would be closing in June 2012. However, due to the remarkable response, and passion displayed by the Nazareth community, including students, families, alumni, administrators, coaches, faculty and staff the Board of Trustees again voted, only two months later, unanimously deciding to reverse its decision and keep the school open. The key to all of this was the strategic development of the Principal’s Plan, which laid the groundwork for securing Nazareth financially for the next four years, through the 2015-16 school year. In addition, Nazareth would not have remained open if it were not for the exceptional support of Sharon Patrick. Nazareth has repaid its loan and is financially sound. Enrollment is up over 30% in the past five years, every student receives a laptop, a new 3-D Virtual Lab has been created and a new science lab and media center has been built. The curriculum has become even more rigorous; Nazareth students have the opportunity to earn over 50 college credits while still in High School. Nazareth is once again returning to its roots of being a forward-looking, progressive institution that emphasizes the use of technology to enhance student’s success. Nazareth RHS continues to be “Where Bright Futures Begin.”

Pay your Registration Fee via Credit Card or PayPal using the button below.

I would like to call your attention to the following procedure. Any student requesting the release of his/her academic records, which is necessary in order to complete his/her application to any college, must return a signed release form to the Guidance Office.

Please feel free to call me if you have any questions about this, or about anything to do with the college application process. I look forward to working with your child as he/she applies to college and welcome the opportunity to talk with you either on the phone or in person.

Khaki or black dress pants are to be worn at the waist with a properly fitted length, which can be purchased at any store; NO denim, NO stretch fabric, or NO cargo pants permitted. Girls are not permitted to wear leggings or jeggings. Plain black belts must be worn, no designer belts or buckles are permitted.

Nazareth white logo dress shirts are to be worn Monday through Thursday and must be tucked in and ironed. No plain white shirts can be worn. Boys must wear tasteful ties and ties are optional for girls.

Nazareth polo shirts can ONLY be worn on Fridays or at the discretion of Administration. The polo shirts are maroon, pink, or gray (long or short sleeve with the NRHS logo).

Students have the option of wearing the Nazareth V-neck sweater, cardigan or blazer. Students must wear a shirt or sweater with the Nazareth or NRHS logo at all times.

Black dress shoes must be worn. No metals/logos or different colored soles are permitted. Absolutely no boots, sandals, open toe, or high heels (over 1”) may be worn. Neither Uggs nor Crocs are permitted. No Coach, Prada, Balenciaga, branded shoes, etc. Sneakers can ONLY be worn for gym.

Uniform black pleated skirt is to be worn at the knee, but no more than 2” above the knee. Girls can wear their choice of socks, leggings, pantyhose or knee socks at the discretion of Administration.

Students’ hair must be neat, well-groomed, and maintained.

During the year, students are permitted to “dress down” and “dress up” for various occasions such as school trips and special events. The following policies pertain to acceptable attire that can be worn:

Nazareth students have the opportunity to earn 50+ college credits through our partnerships with St. John’s University, St. Joseph’s College, and Long Island University. Successful students can transfer these credits to the college of their choice in most cases, thus starting ahead of other students when beginning their collegiate careers at campuses across the country.

Nazareth students can earn credits through enrollment in the following Nazareth classes:

Students can take classes on the campus of St. Joseph’s College. Possible classes include:

Nazareth students also have the opportunity to participate in the Long Island University Early College Scholars Program, which enables them to earn up to 30 credits by taking college courses on the campus of LIU Brooklyn. Courses are offered in Arts and Sciences, Education, Health Science and Technology.

Nazareth uses a numeric system of grading with a range of 50% to 100%. Passing grade for all subjects is 70% or higher. Advanced Placement courses are weighted: the course grade is multiplied by 1.06 to determine both grade point average and class rank.

Students can also earn credits based on their performance on AP exams in the following classes:

Sample Programs for our students year by year are as follows:

Scholarship opportunities are available to incoming freshman only. Nazareth offers scholarships based on the student’s TACHS exam results and middle school achievements. If a student did not take the TACHS test, he/she can register to take Nazareth’s Private Scholarship exam. Contact Ms. Michel at 718-763-1100 ext. 227 or smichel@nazarethrhs.org to schedule this exam. The fee for the exam is $50. The student must register for the exam and bring their middle school grades (6th, 7th, and 8th grade) to be considered for a scholarship.

The Nazareth Catholic High School Scholarship Program (also known as “NAZ CARES”) was initiated to aid Catholic elementary school students who wish to attend Catholic high school, but lack the financial means to do so. The Principal at the Catholic middle school will nominate one student per year.

An interview appointment must be made with the Director of Admissions; a parent/guardian must attend this meeting. Transfer students must present a school transcript, last report card, a letter of recommendation and a discipline report when attending this meeting.

Nazareth RHS offers a TACHS preparatory course for this exam over a five-week Saturday morning schedule, preceding the examination in November, at a nominal fee.

Here are your steps to becoming a Kingsmen for the class of 2024! Register for The Catholic High School Entrance Exam at www.tachsinfo.com (Cost $65).

Friday, October 23, 2020 – Deadline for internet and telephone registration. No late registration or walk-in process this year.

Wednesday, January 13, 2021 – High School Acceptances will be mailed out

We use cookies on our website to give you the most relevant experience by remembering your preferences and repeat visits. By clicking “Accept”, you consent to the use of ALL the cookies.Accept